Mollie McQueen is NOT Getting Divorced

​
Whoever said you cannot buy happiness obviously never paid for a divorce...

When Mollie McQueen turned thirty, she awoke with a determination to live her best life.

Her marriage to Max was the first thing to come under scrutiny and on one sexless night in May, Mollie decided that their relationship was over.

However, when a grouchy divorce lawyer convinces Mollie there’s a chance she could bow out of this life being eaten alive by a pack of cats, she starts to search for an alternative.

Will Mollie be able to rescue her marriage or has the lure of a life without wet towels on the bed turned her head?

Mollie McQueen is NOT Having a Baby

​After the huge success of MOLLIE MCQUEEN IS NOT GETTING DIVORCED, Lacey London brings you the highly anticipated sequel…

Some women want babies, others just want to sleep like one.

Since completing their marriage counselling with therapist to the stars, Evangelina Hamilton, life in the McQueen household was looking rather cosy indeed.

Max was flying high in his new career and Mollie was finally turning her attention to renovating the house that was falling down around them.

Forming an unlikely friendship with none other than the office pariah, Timothy Slease, results in Mollie making it her mission to help him find love.

With a house to renovate and Tim’s love life to sprinkle Cupid dust over, the shock of a possible pregnancy hits Mollie harder than a Ronda Rousey left hook.

Not being the type of woman who goes weak at the knees at the sight of a dirty nappy, Mollie resorts to her old coping mechanism of burying her head in the sand.

Picturing her life with a child in tow makes Mollie question everything she was previously so sure of.

With Aunt Flo refusing to play ball, house renovation catastrophes and dating disasters might not be the only things that Mollie McQueen is expecting…

Mollie McQueen is NOT Having Botox

​"Maybe she was born with it, maybe it’s Botox…"

It’s November. Mollie’s least favourite time of the year. The days are short and the nights are cold, but when her nearest and dearest get hit with a case of the midlife crisis bug, it gives her something more than the terrible weather to complain about.

Watching her parents and in-laws putting themselves through chemical peels and hair transplants causes Mollie to make it her mission to prove that the natural approach to anti-aging is best.

Spending time with her eccentric and outlandish neighbour, Mrs Heckles, just adds to Mollie’s firm opinion that growing old gracefully is the only attitude to have.

Enlisting the help of Tim’s ageless girlfriend, can Mollie convince her loved ones to step away from the scalpel and learn to love the person in the mirror?

With snails, urine and some rather unorthodox tools at her disposal, Mollie certainly has a hard task on her hands, but with a troublesome cat, a huge work opportunity and a friend heading for heartache, will they all be taught a lesson in the cruellest way possible?

Mollie McQueen is NOT Ruining Christmas

​“Be naughty and save Santa a trip. It’s better for the planet…”

There was little over a week to go until Christmas Day, but Mollie McQueen hadn’t sent a single card. She hadn’t purchased one gift, and she hadn’t decked the halls with anything other than mountains of wet laundry.

Usually, come the first of December, the McQueen house resembled Santa’s grotto. Stockings would hang from the fireplace, his and hers advent calendars would be propped up on the mantlepiece, and the two sparkly polar bears bought by Mollie’s mother would stand proudly on the windowsill.

This year, all was quiet on the Christmas front. The door was missing its usual wreath, the sprig of mistletoe was absent from the hallway, and the alcove in the living room was minus the retro tree that Mollie normally insisted on rolling out on the first day of December.

When Mollie first announced her plans to strip Christmas back to basics, she received nothing but negative feedback. Max accused her of trying to ruin Christmas, Margot advised her to chuck back a daily vitamin D pill in a bid to rediscover her Christmas spirit, and Mrs Heckles had taken to singing Christmas carols through Mollie’s letterbox.

Despite their grumbling, Mollie was determined to prove to everyone that you could enjoy Christmas without falling victim to the endless marketing campaigns that emotionally blackmailed you into purchasing unnecessary gifts for people who would rather have a pack of socks and a slice of Yule log.

With her no-Christmas Christmas amassing quite the guest list, Mollie had an almighty task on her hands.

Can she convince her nearest and dearest that the true meaning of Christmas had nothing to do with expensive gifts and garish decorations?

The next instalment in the Mollie McQueen series is now available to pre-order! 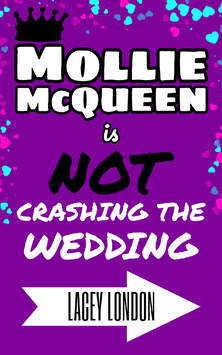